I recently posted the above picture to my Facebook page as an idea to share. While I had done something similar the above picture isn’t mine. (I tried to find a link to give credit but the image didn’t link anywhere. If anyone knows whose it is please let me know!!) My pictures were on my classroom iPad that I no longer have! I created a new poster to show you with a younger student holding it so you didn’t have to look at my face. It will make me feel better about my handwriting capabilities if we just pretend that a third grader wrote it and not me!

I really like this idea for many reasons. It is a fun, engaging activity that can be used for a variety of topics. The above picture used this idea for biographies. When I used it in my classroom, I did it with character traits. Hopefully this post will help you see how it worked for me!

We have been having a huge focus on close reading in our state and district trainings. Our school decided to give each grade level team one of the common core reading anchor standards and present a close reading lesson to the faculty. The standard we were given was directed at the characters in the story. (I believe that it was the CCRA.R.3 which is the anchor standard for reading number 3). We wanted to come up with something that was engaging for the students that went beyond filling out a worksheet.

My other teaching half had seen a similar picture on Pinterest (aka the best site on the planet). The picture she saw also covered biographies. She brought that picture to our attention and told us it would be fun to do the same thing using character traits. Then our students could present their posters to the class.

I didn’t have time between our assignment and the next faculty meeting to do this whole class. I decided to do it in two of my guided reading groups that had 5-7 students in each. This actually worked out to be a better idea because then I could work more one-on-one with the students to find the traits in their different books. 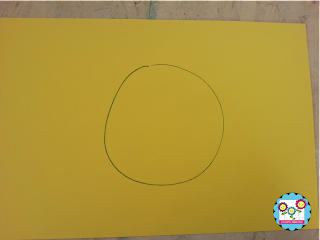 I took a normal size poster board and cut it in half. This could easily be done on a full poster board but I had a limited number of poster board and had some smaller students with a smaller arm span. I measured one of my students faces to give me an approximate shape. Then I traced it onto the boards and cut it out. Depending on your grade level you could have the students cut it out. Since I was presenting these in a faculty meeting I decided to cut them out. 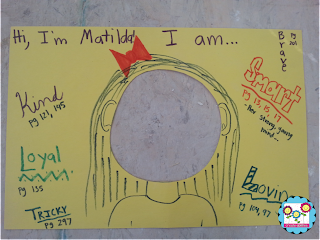 I gave them to my groups and we talked about the assignment. Each of my guided reading groups was on a different book depending on their level so I had a wide range of character choices. Each student was able to pick which character they wanted to do their poster on. We went over the rubric that they would be graded on and what I was looking for. The task was pretty simple. Here are the guidelines that I gave them:

Close reading has a major focus on finding evidence in the text to justify your answers. My students were used to my Evidence Based Terms and Language Arts Graphic Organizers and so finding evidence came easier to them than I think it would have previous years when I didn’t use my posters.

The students wrote in pencil first and then traced over it in marker. When they were finished we practiced presenting it. They pretended they were that character and said things like: “My name is Junie B. Jones. I am a smart student. You can tell I’m a smart student because I worked really hard on my homework and got a good grade on it.” They were so cute! When they felt ready we filmed them on my iPad so they could see it and so the other teachers could see it. They felt very special knowing that the other teachers wanted to see it. 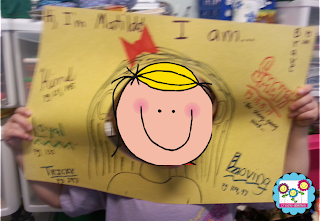 I graded them using a simple Presentation Rubric that can be found for free by clicking on the link. This project took us 3-4 guided reading sessions of about fifteen minutes each.

I hope your students enjoy this as much as mine did!

How Using Visual Direction Cards Can Save Your Sanity
June 04, 2018